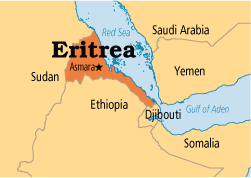 Pray for the less reached, specifically for:

a) The Tigre, mostly Muslim, and one of only a few Eritrean or Ethiopian Semitic peoples who are not Orthodox. They are related to the Tigrinya, but culturally distant from them. The Bible is available, but there are few Christians.

b) The Jabarti – a Muslim minority among the Tigrinya. Pray that the unrest might create opportunities for Tigrinya Christians to engage this related but previously distant group.

c) The Afar and related Saho peoples, largely nomadic pastoralists in the southeast with few Christians.

d) The Beja and Nara peoples of the northwest with no known witness. Many are nomadic.

e) The Arab Rashiada, who migrated from Saudi Arabia in the 19th Century. Recent work among these peoples has been reported, but there are still no known churches.

Christian support ministries have grown even more vital in recent years, since more conventional work has been shut down or suspended.

a) Students still in Eritrea remain fervent in evangelizing and discipling their peers, and large numbers continue to come to faith. Many recent evangelical movements were started or fuelled by students committed to Jesus.

b) Radio and satellite TV provide programming for Christians in Tigrinya and English, though some work has shut down in recent years, including an evangelistic work among the Tigre and Beja peoples. Christian radio is being broadcast into Eritrea from neighbouring countries. Pray for the gospel to go forth through these channels; shortwave radio Bible studies reach even into the military camps.

c) Other resources include the JESUS film (six languages), GRN audio Scriptures/teachings (in eight languages) and a series of tracts as well as a Bible Correspondence Course developed by FFM. Pray for widespread and effective use of these; pray also for development of more materials that will bless Christians and more tools for use in reaching others.