Unreached peoples. There are 78 ethnic minorities considered unreached, totalling over 13 million in population. (See the different ethnic republics below.) Most expatriates and even Russian ministries focus on reaching ethnic Russians. Moscow operates as the centre of the former Soviet world, and nearly every ethnicity from the fSU can be found there. Most of these ethnicities are more accessible and open away from their home location and cultural setting. Pray for effective partnering and viable strategies to plant churches among them.

a) Muslims number over 17 million and account for the majority of non-Russians in the Russian Federation. Their growth and the ethnic-Russian decline could make Muslims a majority in Russia by the end of the 21st Century. The largest groups are Tatars (5.5 million) and Bashkirs (1.6 million), but there are also many Central Asians and peoples of the Caucasus. Undocumented and often illegal, millions of Central Asians live as temporary workers in Russia. Pray for openness to the gospel on the part of Muslims, and a loving and sensitive passion for their salvation on the part of Christians in Russia.

i Radicalization of Islam. While only around 20% (at most) of Muslims faithfully practice Islam, the radicalization of Muslims in Russia accelerated due to the Chechen war and foreign Islamist influences. Russian military belligerence in the south and the equation of Christianity to Russian imperialism make witness to these peoples difficult for practical, cultural and spiritual reasons.

ii Conversions to Christianity. Some reports claim up to two million Muslims converting to Orthodoxy. This is seen as a reaction of horrified Muslims to terrorist atrocities, such as the Beslan massacre, and consists of mostly nominal Muslims in the Caucasus region. Protestant missionary effort is limited but sees fruit among the peoples of the Caucasus.

i The Jews once numbered over two million, but are now reduced to one-eighth of this. Emigration to Israel continues, but there are important concentrations in European Russian cities. Significant numbers – over 10,000 – have come to Christ, and a large proportion of Messianic Jews in Israel are of recent Russian or Ukrainian origin. However, pockets of Georgian, Tat and Hill Jews in the Caucasus region are still unreached. The Jewish Autonomous Oblast in Far East Russia only has a few thousand Jews remaining, but there is outreach to them.

ii The Romani (Gypsy) live scattered over European Russia with many in the Urals; they are significantly Christianized but also heavily marginalized. Some areas see an awakening and churches planted. About 5% of Russian Gypsies are evangelical.

iii The Chinese number over 50,000 in Moscow alone and over one million nationally, including temporary migrant workers in Siberia and the Russian Far East. They are largely unevangelized, though a few dozen small churches exist. Russian attitudes toward Chinese are poor, but Chinese in China and abroad have a growing heart to reach these unappreciated workers who are essential to Asiatic Russia’s economy.

c) The 16.5 million Russians of the “near abroad”. The collapse of the USSR left many as ethnic minorities in the 15 new states formed, where they are often resented. Their status and future are far from secure. Nearly 20 million Russians emigrated back to the Russian Federation in the last 25 years – often with few possessions. Pray that many among them might be receptive to the gospel and in turn gain a burden for the non-Christian peoples among whom they lived. 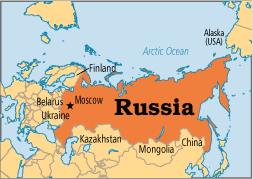