There is a considerable increase in missionaries and agencies since 1978, probably numbering over 1,000 today. But some areas remain largely unreached. Proliferation of agencies and lack of coordination are issues for concern. Pray for:

a) Christian workers to be called to less-evangelized areas, such as Castilla Leon, parts of Andalucía, Extremadura, the northern provinces of Galicia, Asturias, Cantabria and the Basque country.

b) Missionaries to be able to integrate fully into Spanish culture and life. Challenges adapting and integrating persist.

c) Latin Americans are present in great numbers. Careful and conservative estimates state that 48% (others suggest up to 80%) of all new churches are planted by Latinos – missionaries, tentmakers and economic migrants. This claim is contested by others, but there is no denying the massive missional impact of Latinos upon Spain.
Some larger missions are AoG, WEC, YWAM, CB, ECM, OM, TEAM, GEM, ABWE, OMS and WH.

The evangelistic challenges facing Spain are enormous, including:

a) Unreached cities. There is no evangelical church in 345 cities and towns of over 5,000 people. Many smaller towns, villages and districts have no witness whatsoever. Of 8,112 municipalities, only around 650 have an evangelical church.

d) While religious liberty exists on paper, difficulties and discrimination are still widespread for evangelicals, especially for obtaining licences to broadcast and to open new churches.

e) Evangelical congregations are small and dependent on foreign resources, with poor facilities in less than ideal locations. Pray for wisdom in knowing how to be more effective in outreach and balanced in testimony. 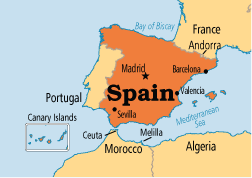 Help our Church
Scroll to top