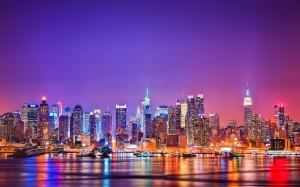 This past Sunday we learned that God intends to renew all things, including society, through the work of Jesus Christ. Sometimes salvation is presented as “spiritual” as opposed to “physical” and so we envision our ultimate salvation as a non-physical and non-social reality to come. But that is not the case. The visions that God gave to the Apostle John indicate not only that there will be a new creation but also that those who believe in Jesus will be resurrected from the dead and part of a new society within a renewed creation.

To illustrate the difference between the hopes and dreams that are centered on temporary and passing cities and the ultimate city to come, the City of God (or New Jerusalem) I rewrote “New York, New York”. I include the old version plus my new version “God’s New City” [patent pending] below.

Start spreading the news
I’m leaving today
I want to be a part of it
New York, New York

These vagabond shoes
They’re longing to stray
Right through the very heart of it
New York, New York

If I can make it there
I’ll make it anywhere
It’s up to you
New York, New York

Start spreading the news
We’re  here to stay
We want to be a part of it
GOD’S NEW CITY.

These vagabond shoes
They’re longing to stray
Right through the very heart of it
GOD’S NEW CITY.

Our little town too
Is going to play
An important part of it
In New Zion!