The religious scene of Rwanda has been reshaped by the 1990s. A country in which 80% call themselves Christian, yet allowed and perpetrated such atrocities, might have been Christianized, but it clearly was not converted. Pray for:

a) The Catholic Church, which lost much credibility by failing to adequately oppose evil and speak against the ethnic hatred that led to the massacres. Many righteous Catholics, including priests and nuns, laid down their lives to protect others. But others failed to intervene or even connived with the perpetrators. As a result, many defected away from Catholicism out of disillusion. Pray that such nominalism and compromise might never happen again and that genuine renewal will transform the Catholic Church; signs that Catholics are seeking renewal are encouraging.

b) Evangelicals grew rapidly in the aftermath due to very active evangelism, aid programmes, ministry to the hurt and traumatized and a message of hope for all regardless of tribe. The East African Revival of the 1930s began in Rwanda. Pray for a new revival to break out, one that places tribalism and revenge at the foot of the cross and is characterized by repentance and reconciliation. Some evangelical groups seem concerned only with numerical growth rather than discipleship and transformation.

c) Muslims also increased significantly in the last 15 years – unsurprisingly for similar reasons as evangelicals. Aggressive mosque building, aid and education programmes, a universal message that transcends ethnicity as well as the moral high ground for playing a less active role in the genocide have seen Muslim numbers increase to possibly over 5% of the population, although this number is disputed. There is negligible Christian outreach to Muslims, and churches have little idea how to do so; pray for a loving witness by believers.

Thousands of spiritual leaders were murdered or fled and have not been replaced. The remaining often despair of being able to cope with the desperate physical, social, psychological and spiritual damage done. Less than 10% of evangelical pastors have any formal theological training. Several theological colleges have a born-again presence, including the Rwanda Institute of Evangelical Theology (the encouraging result of the merger of two colleges), an Anglican college and a Pentecostal college. All face challenges. Some pastors train and study in Uganda or Kenya. A number of other programmes, including TEE and modular training, are also being utilized. Poverty often prevents pastors from getting the training they need and long for. There is a dearth of good Bible study aids, and the government’s decision to rapidly transition from French to English as the language of education will impact training for some years. Pray that God may raise up godly men and women fitted for Rwanda’s hour of need. Pray also for financial provision for both students and schools. 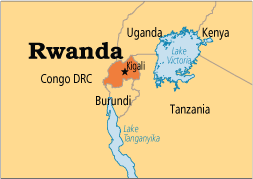 0Hours0Minutes0Seconds
Mark 12:28-34The Practices of Passionate Spirituality
Scroll to top