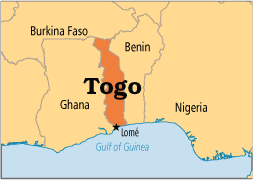 Christianity, particularly evangelical and Pentecostal, has grown rapidly since 1990. Evangelicals increased sevenfold from 1990 to 2010, growing from 2.7% to 10.7%. Praise God for the multiplication of Pentecostal and charismatic movements, fuelled by the Holy Spirit and largely driven by West African pastors and evangelists.

The less-evangelized peoples of Togo. Togo and Benin have long had the highest percentage of unevangelized traditionalists in Africa. The major challenges: