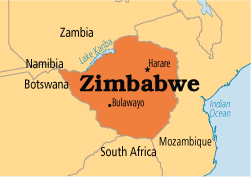 Young people have watched idealistic visions fade to empty slogans and oppressive misrule. They constitute a huge swathe of the population, but have little reason to hope for improvement to their difficult lot. Pray for the ministries of:

a) Fellowship of Christian Unions – FOCUS(IFES) has 50 groups with 5,000 students served by five full-time and one part-time staff. In the midst of societal dysfunction the students continue to declare the gospel and help where they can to serve the practical needs of the people.

b) Scripture Union has had a decisive impact on the educated via its work in secondary schools. They impart life skills to younger students, work with orphans and children at risk and provide HIV/AIDS education. Camp ministry has been especially fruitful. Pray for more Christian teachers to nurture this work in their spare time.

c) African Enterprise impacts about 50,000 people and hundreds of churches per year with its youth-oriented Foxfire ministries. This ministry, going since 1980, has spiritually shaped many of the nation’s top Christian leaders.

Pray for the less-evangelized. Zimbabwe has been extensively evangelized, but areas of need remain:

a) The rural areas, often neglected for church planting and for sending qualified workers. Pray more will be called to this humble but vital task. Pray also for evangelistic outreaches and suitable literature distribution specifically to these areas.

b) The burgeoning cities, swollen with hundreds of thousands of rural migrants looking for non-existant jobs. Squatter settlements are multiplying and crime is on the increase. Outreach to the unemployed is a major challenge.

c) Less-reached peoples. There are some congregations in every indigenous people, but relatively few among the Tonga, Nambya and Dombe of the Hwange-Kariba area in the northwest (where the AoG have made a significant impact), the Kunda in the northeast and the Tswa in the southeast.

d) Muslims. They are a small minority but wield disproportionate influence on the country through foreign aid “with strings”, mosque-building and scholarships in Muslim universities. Most are Yao from Malawi, some are South Asian immigrants and a few are indigenous Shona-speakers. Little Christian outreach has been made to win them and churches are ill-equipped to do so.