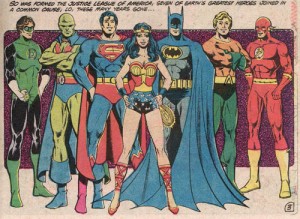 Did you ever read comic books or enjoy watching one of the recent Avengers movies? If so you are probably also familiar with The Justice League of America. The Justice League was made up of all the DC Comic Books greats: Wonder Woman, Batman, Green Lantern, Superman and others. Their whole mission was about bringing justice and righteousness into the world. With some modifications the same can be said of the Church of Jesus Christ, the seed of Abraham – we are the Justice League of Heaven.

So, suit up Wonder Woman! Get your tights on Green Lantern! The Just and Righteous Lord of Heaven has forgiven you, adopted you and gifted you with his Holy Spirit so that you can help further the work of the greatest bunch of superheros ever – the Justice League of Heaven.

– We learned about how God displays justice and righteousness through being non-prejudiced in his judgments of others, through hearing out the oppressed and correcting the oppressor, and by being more concerned to bless the world than to condemn. Which of these makes you admire God most? Why?

– Who were your heros growing up? Why? Did they display aspects of justice and righteousness?

– We learned that Abraham demonstrated the way of the Lord by interceding for Sodom and Gomorrah. Who do you have a hard time loving but need to begin praying for their good?